A few years ago I performed a wedding in a couple’s rural New Hampshire home. It was simple and meaningful and I felt good about it.  Not too long after that, one of them posted a story about getting their license and deciding how and where to be married. In the article she referred to me as “…the elderly justice of the peace…” Now, I would like to say that I don’t dwell on disconcerting comments about my age and indeed it wasn’t too long before I forgot it but it did, in fact, bother me. After all who wants to get old,  especially when that means that time is more likely to be running out? I am sure there are plenty of older people who are coping better than I but let me run some thoughts about aging by you.

Almost everyone I have asked agrees that they don’t feel their age. Sure, when trying to jog across a busy intersection or stoop over to pick up something dropped on the floor, the physical reality rears its ugly head but otherwise we feel as young as ever. That’s a good thing especially when younger people don’t reject you based on numbers of wrinkles or gray hairs. Of course, lots of them do but I know hundreds who don’t. Forgetting what year one is born in and simply being oneself works wonders.

Another important thing to remember, as macabre as it sounds, is that we all die, some earlier and some later. Things like not smoking, watching your weight, eating less junk food, and exercising every day are critical. However, it is not that such activities will protect you from dying, it is they will most likely make living more fun.

Fun, indeed plus joy, excitement, anticipation, love, these are things that make aging painless and they are not that hard to find anytime, anyplace. I have a silly cat who expects to be lifted to the table every morning when I sit down at my computer so that he can look at the window. Then after he accounts for all the chipmunks he turns around and starts a loud purr while he reaches out and touches me on the shoulder. Now, tell me, how in the world can you think about getting old with a pet like him around? 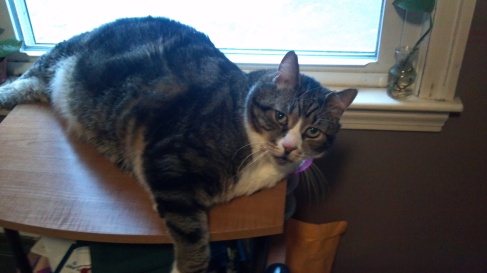 Another thing to do is engage people as you go about your day. When I ordered a couple of pastries at Starbucks this morning, I asked for them to be put in a bag to which the twenty something barista responded “Oh, you don’t want me to throw them at you?” I had a rejoinder but that didn’t matter. What really counts is that she felt she could say that in fun.

I don’t remember exactly when I first really, really got that some day I would no longer be here. I do recall it was an adrenalin rush like none other. It turned out to be OK though because it sparked in me a subtle but actual new appreciation of the days that I did have while I am still here.

Andy Rooney, the wonderful 60 Minutes curmudgeon was interviewed after his retirement. One of the questions was “Do you think about dying?” His answer is classic “Yes and I don’t  like it.”

And so it goes

Retired United Church of Christ clergy person who drives for LYFT sometimes; partners with and backs up The Rev. Dr. Carla Jean Bailey, Senior Minister at Second Church Newton; is a very progressive Democrat; and loves felines. View all posts by Words From Warren