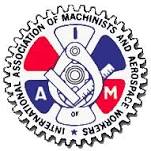 I am proud that my father was Grand Lodge Representative of the IAofM. He became a member of the union in the 1940’s when he worked as a machinist at Consolidated Vultee, building the PBY Catalina, one of the most widely used seaplanes of World War II.  After the war he was hired by the Union as a negotiator and faced several harrowing situations, spending much of his time traveling.

I guess he had had enough* by the time I was in the 4th or 5th grade because we moved to our final home way out in the boondocks (at that time) and he got a job delivering meat products for Herman Sausage Company. I began working with him summers, as he liked to say, learning what not to do and, more importantly, becoming a hot dog gourmand(!)

He died early, at age 56, after I had left Jacksonville and received my MDiv for the Methodist ministry from Garrett Theological Seminary. He had a heart attack a couple years previously and, trying to keep the connection, I wrote regular letters. I hope they were meaningful during his last days.

As all we who have lost fathers do, I wish there had been many more days we could have corresponded or talked in person. The fact of life is that there never are. The trick is, if they were warm and kind, to let our fathers live on in us. If they were mean and harmful maybe it is like my working on the meat truck, let our fathers teach us what not to do.

There is no magic to Father’s Day but we can take pasue and remember. We can give thanks for their lives.

*Recently I did a bit of googling about the IAofM and discovered that it, like other large unions, has a history of corruption, which may even exist today. A positive a slant on my father’s quitting his job might be that he was not willing to work in those conditions.  Or that we did not want to get arrested